More than 1,900 leading life scientists in Europe and beyond

High-resolution image of the network

A network map of EMBO Members joined by shared keywords 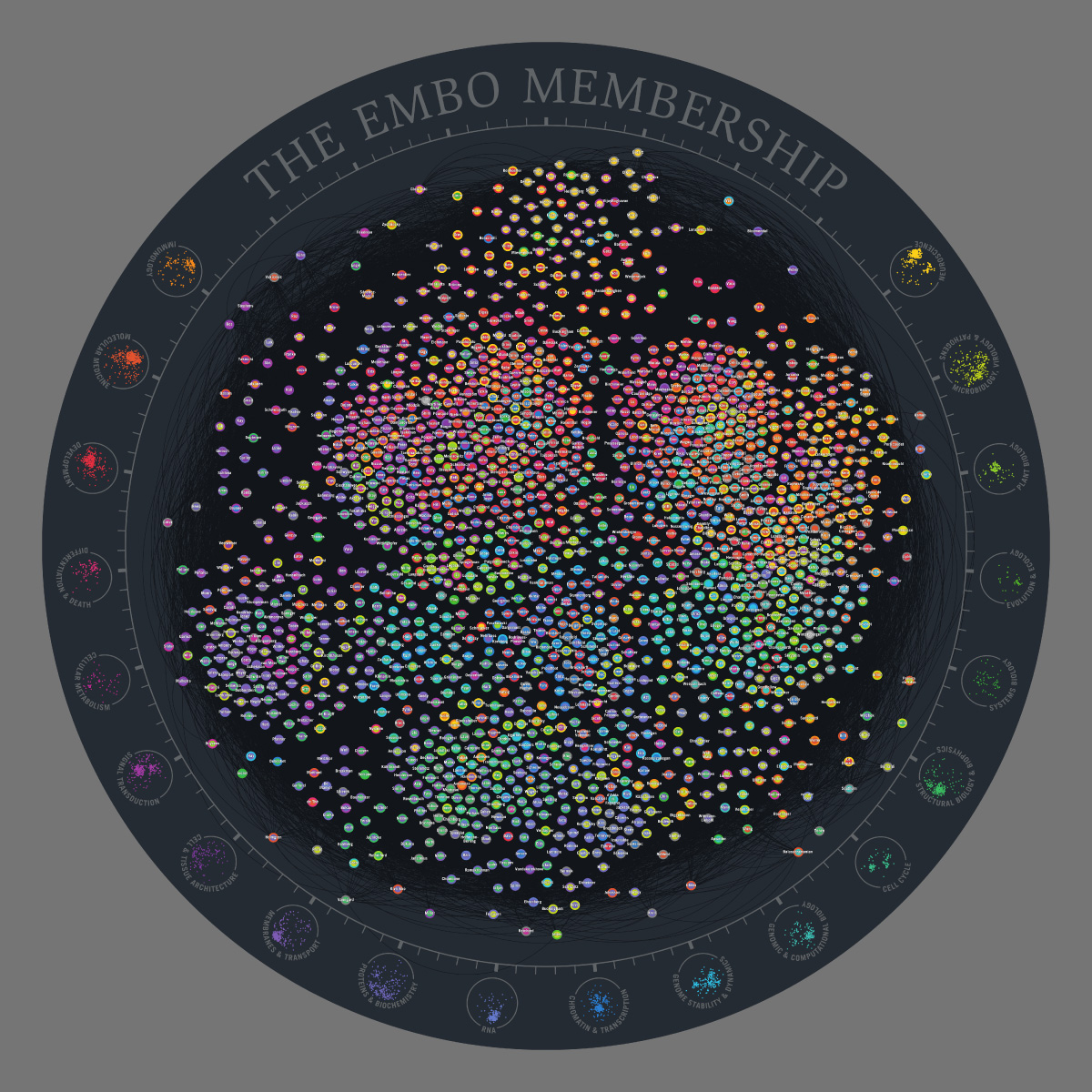 A carpet displaying a network map of all active EMBO Members. It was designed for the 50th anniversary of EMBO in 2014.

One EMBO Member, having found his spot on the map.

The 50th Anniversary EMBO Members’ Meeting took place in the EMBL Advanced Training Centre and in the EMBO Building in Heidelberg from 29 to 31 October 2014. On this special occasion, the EMBO Membership Office had designed a carpet with a diameter of 4 metres displaying a network map of all active EMBO Members, connected and clustered by shared keywords. Please see below for details.

SAMPLE: The map includes 1,650 EMBO Members and EMBO Associate Members who in July 2014 (i) had valid EMBO Keywords (EMBO Words ) assigned to them and (ii) shared at least one of those EMBO Words with another EMBO Member.

DISTRIBUTION: The network parameters were adjusted to achieve a continuum of expertise rather than a strong clustering around dominant, general keywords such as “cancer” or “development”. The 208,222 unique joins (edges) between EMBO Members (nodes) were weighted by the number of EMBO Words people shared ( 1 ≤ n ≤ 10 ). Nodes were then clustered based on this weighting (MCL clustering) and layed out in Cytoscape 3 (Shannon et al, 2003) using an Allegro Edge-Repulsive Spring-Electric algorithm with a normalized linear-weight transfom of the mclCluster parameter.

NEIGHBOURS: Nearest neighbours in the resulting network need not be close neighbours in expertise. It may happen that people who belong to two or more scientific communities are drawn into the centre of the network although their peers in the respective communities are clustered much farther on the outside. The final rendering was adjusted to avoid overlap between nodes and retain readability of the names.

COLOUR CODING: Each node was coloured with hues corresponding to the two most relevant EMBO Subject Areas for the respective EMBO Member; the centre of each node represents the primary subject area and the perimeter corresponds to the secondary subject area. The smaller circles along the periphery of the map provide a key to where people from a particular EMBO Subject Area are located.

LIMITATIONS: EMBO Words are mapped to individuals semi-automatically, based on free-text keywords people choose for themselves; those keywords may not be up-to-date in all cases. 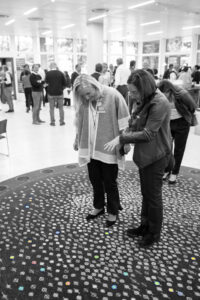 Several EMBO Members trying to find “their” spot on the map.

For the purpose of this project, EMBO did not assign keywords independently.

EMBO Words do not form an ontology and are neither hierarchical nor equi­valent in scope; no weighting was applied that would take into account the relative frequency of keyword terms.

Individuals with fewer / rarer keywords are less likely to be joined to others and will end up in the periphery of the network.

ORIGINAL USE: On the occasion of the 50th anniversary of EMBO, the image above was printed as a circular carpet with a diameter of 4 m and displayed at the EMBO Members’ Meeting 2014.